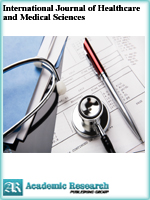 Authors: I. Yahaya ; V. B. Oti ; J. Y. Dahiru
Pages: 15-20
DOI: doi.org/10.32861/ijhms.62.15.20
Abstract
Malaria is still considered globally as a leading cause of morbidity with Nigeria carrying the highest burden of 19%. Coinfection of malaria and Human Immunodeficiency Virus (HIV) accelerate disease progression of HIV/AIDS subjects. This study investigated the prevalence and predictors of malaria among HIV infected subjects attending the antiretroviral therapy Clinic at Federal the Medical Centre, Keffi, Nigeria. After ethical clearance, 200 whole blood specimens were collected from patients who gave informed consent and completed a self-structured questionnaire. The specimens were examined for malarial parasite using rapid kits and microscopy. The overall prevalence of the infection was 78/200 (39.0%). The prevalence was higher in male (44.7%) than female (34.0%) subjects. Those subjects aged < 20 years (54.5), male gender (44.7%), non-formal education holders (61.5%), farmers (62.5%), stream water users (48.1%), those that lives in rural setting (43.6%), those that do not use Insecticides Treated Nets (ITNs) (39.4%) and swampy environment dwellers (41.7%) were identified predictors for malaria infection in the area. All the predictors studied did not show any statistically significant difference with the infection but some arithmetic difference exists (P > 0.05). The 39.0% prevalence of malaria in HIV infected subjects is a public health concern. Therefore, Public health surveillance and health education among HIV population should be advocated to help eradicate malaria comes 2030. Further study that will characterize the genes of the parasite should be carried out.