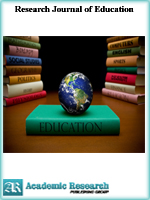 Authors: Muhammad Kristiawan
Pages: 15-20
Abstract
This research was aimed at describing how is the model of educational character in High School Al-Istiqamah Simpang Empat, West Pasaman, West Sumatera and what strategy that was used by High School Al-Istiqamah to keep the quality outputs which have character, then this research became a model in organizing educational character related to the sustainable development and capacity human building. To get the aim of the research, the researcher used qualitative ethnography methodology. This study carried out on the condition of natural and cultural nature, it is more descriptive, it emphasis on the process rather than the product or outcome, data analysis conducted inductively, and further emphasize the significance (data behind the observed). The techniques of collecting data consisted of interviewing, observation, documentation, and triangulation. The model of educational character was (1) religious; (2) moderate; (3) smart; and (4) independent. The Strategy which was done to keep the output was forming the school’s culture such behavior, tradition, daily life, and symbols which were applied by all members of school and society around school.